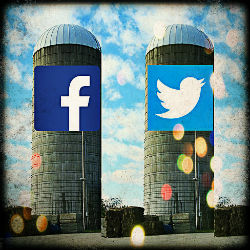 Today we're talking about social media silos costing you business and also we're going to talk about "landing the plane". Stick with me and it'll all make sense.

Okay, so I work with numerous small businesses. A lot of them are owner-operators/solopreneurs and like most people they use Facebook.

For instance, there's a musician I work with and he frequently uploads new videos to his Youtube channel. Then on Facebook, he'll embed his Youtube video and as you may or may not have noticed - if you're on Facebook watching a video...it's very easy to just click and watch it. You don't have to leave Facebook, you don't have to do much of anything

Now, why do you want to do this?

So from an asset standpoint, you want to own the asset. You want to have it in an area where you can control it. You want it on your website first of all, and then you can send the traffic from Facebook to your website.

Once it's on your website, now your visitors are in your territory. You have much better chances of converting them to an email subscriber and once you have their email, you're much more likely to be able to sell something to them - which is the name of the game.

So the better process, instead of sharing your video on Facebook and they're only watching it on Facebook...at the very best maybe they're going to Youtube, what you want to do is upload your video to Youtube as per usual, but then you'd embed that video in a blog post on your website.

You'd write a good blog post, ideally you'd even possibly transcribe the video and put it into the blog post. So then, once that's all ready to go - you'd go to Facebook and you'd do an update and you'd include the link that sends them directly to the video on your web page.

You could even create an image related to your video. You could just take a screen capture of the video itself and use that as an image. Put a caption on it and upload it to Pinterest and have a link from that going back to your website as well. It's like you have your social media sites floating in space and your website is kinda floating down below it and there's nothing connecting the two. So I call it "landing the plane".

Get the traffic out of social media. Get them to your website and then you can convert them into subscribers and buyers.

Anyway, that's it. Get rid of the social media silos. Send more traffic to your website and prosper.